If you were to come into my house a few months ago, you would have seen piles of junk, dirty sinks, floors littered with crumbs, heaps of unfolded laundry, and a general sense of slight chaos. Why? It arrived at our house on July 4th and came in the form of a cute, helpless human being who cried quite a bit and took literally all of my attention and energy. Letâ€™s call her baby #4. And letâ€™s put it boldly and without exaggeration: I needed HELP. My house has started to get that neglected gleam, and this was not good. 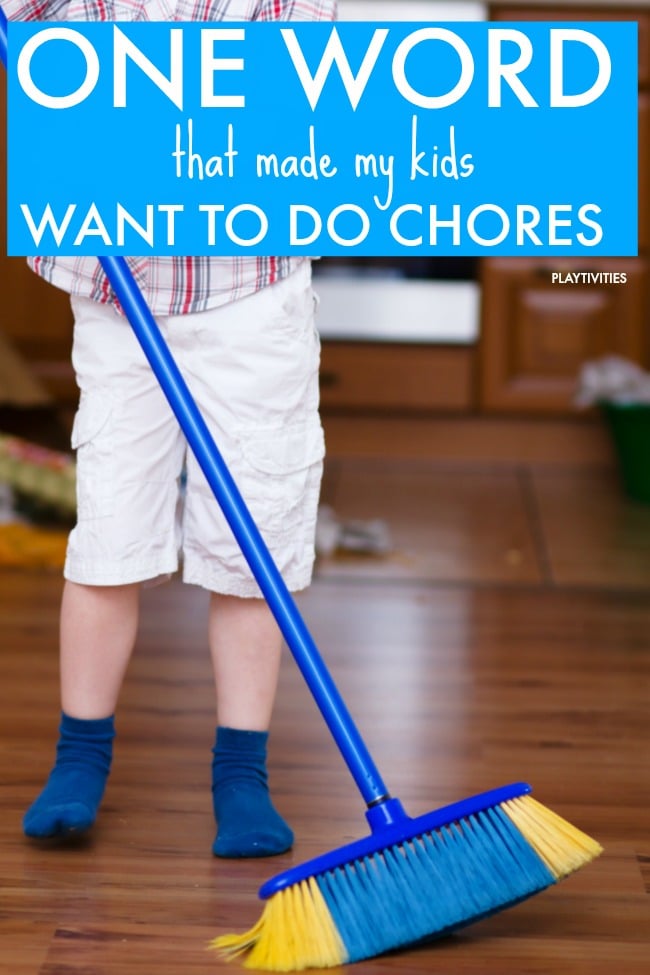 In the past when I mentioned this word they ran away from me, yelled, or said something they would later regret. â€œChoreâ€ meant something Mom made you do so you could get something else, and usually it lasted only a couple of days because she would forget about it or give up, because she was tired of fighting about it. It was just easier to do it myself. Until, I realized that I wasnâ€™t doing them any favorsâ€¦

Four months later, due to complete desperation, I got my help. It came in the form of 3 able-bodied children ages 3, 7, and 8 who quickly learned a new word, and it was not â€œchore,â€ but â€œjob,â€ and in order to be an active member of the household they were now an official employee and would hold a serious job title and a serious job.

For some reason, as soon as I stopped using the awfully dreaded word â€œchore,â€ my kids seemed open to the idea of helping around the house.

I gathered my three lovely, precious children around me and explained as simply as possible that I needed help around the house, and that because they too were members of the household they needed to participate in the running of the house.

They were going to be â€œhiredâ€ to do a job everyday because they live in the house. No payment was going to be given in the form of money or rewards, but they were expected to perform their job everyday.

We then came up with a short list of small jobs that needed to be done around the house. I encouraged them to get up and look around at what looked â€œmessyâ€ or â€œdirty.â€ They came up with the list! My oldest said: â€œThere are a million blocks on the floor.â€ Sweet dear daughter then replied with: â€œYeah, look at the laundry all over the couch.â€ And so this went on for several minutes, like a beautiful song, back and forth music to my ears!! A motherâ€™s dream come true!

So then, after we narrowed down the rather long list of jobs, (Ok, Iâ€™m not that terrible of a house-keeper, theyâ€™re just very observantâ€¦?)Â  we came up with really fun and creative titles to their jobs. Hereâ€™s what our job chart looks like:

P.S. I thought about getting a big poster board and writing the titles down with fancy colors and then getting very professional looking clips, but come on, the whole point of this was that I didnâ€™t have TIME to get everything done. This simple â€œchartâ€ works just fine for us. Actually I think the simplicity of it speaks numbers. Each job is listed and a clip with the childâ€™s name is clipped next to their job for that day. They move down the list and each day they do something new.

1. When making the list of chores I made sure that these were jobs they could perform independently. I would discourage anything that you will have to assist with, only because this is their job and it is so you can do other things while they are busy.

2. Here are a couple of items that we use that are not technically for children, but work great:

3. I make sure that when describing each job, the kids know where to find all of the cleaning products and how to use them.

4. I walked them through each job title and showed them exactly how each job was to be performedâ€”like a real job! This helps to lay out clearly what they are expected to do so there is absolutely no confusion when it comes to performing each job.

5. After dinner, but before TV or outside play, everyone in the house does his or her daily job. There are days that a brief whine will sneak out of their mouths, because wellâ€¦itâ€™s technically still a chore, and they are children. But carrying out a duty that helps run the household leaves them with a feeling of responsibility.

And now that gleam of nastiness in the bathroom sink, is only a gleam, like a clean real sparkle, and it feels good to know that my children made it sparkle.

DID YOU READ THIS?Â

« Sweet Quesadillas
10 Amazon Tips On How To Save Money »